The global discourse on improving the conditions of garment workers has intensified in the past decade. This was triggered by the enormous tragedy of the Rana Plaza collapse in 2013. 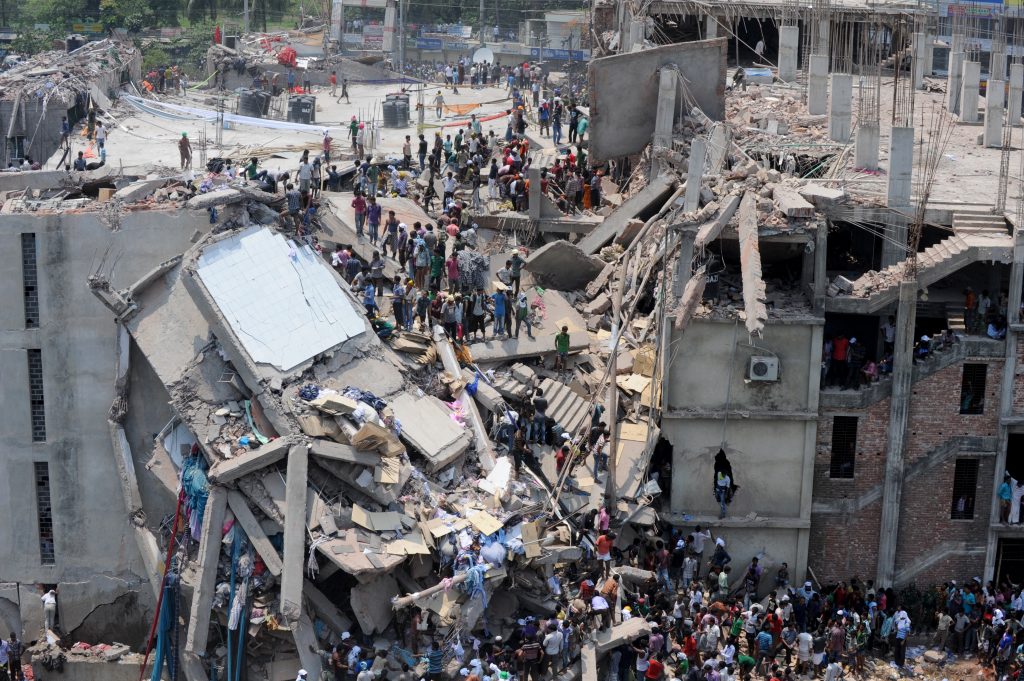 Rana Plaza was an eight story building in Dhaka, Bangladesh.  It housed five garment factories that made clothing for major brands from the US, UK, Spain, Italy, and other countries. On April 23rd in 2013, cracks started appearing in the walls and major structural components.  Work was halted and the building was evacuated, with local news stations reporting on the visible cracks.  After an inspection was conducted the same day, the building was reopened for work on April 24th.  Workers apprehensively returned to work, but during the day the entire building collapsed in under 90 seconds, killing 1,134 and injuring over 2,500, and making the tragedy one of the worst industrial accidents recorded.

There are several contributing factors that culminated in this tragic event.  The building was built on a filled in pond, which compromised the strength of its foundation.  The building’s original purpose was for commercial businesses including offices and shops, and it was not equipped to withstand industrial activities.  Additionally, the building had four extra stories added on to it without permits. The decisions made by management to send workers back into the building on April 24th was due to a lack of protection for their rights, and the pressure to meet deadlines for orders with short turnaround times that are typical for fast fashion brands.  The pressure to achieve lower costs prevented major brands from overseeing or regulating the working conditions for employees.

Following the tragedy, there were both local and global ramifications. In Bangladesh, garment factory workers rioted for two days after the building collapsed, kicking off a series of protests that continued for weeks.  Thousands of workers marched in Dhaka on May 1st for International Worker’s Day, and then a week later blocked a highway to demand outstanding wages and three months salary following factory closures, which would only amount to $120 per worker. In the following weeks, 18 garment factories closed across the country, with the textile minister stating that more closures were to follow to enforce safety regulations.  The 2013 Accords on Building and Fire safety signed by 200 global brands, ensuring safety regulations were upheld throughout Bangladesh.

The tragedy triggered global response from reputable organizations including the UN International Labor Rights forum and the Human Rights Watch.  Several other organizations were started as a response, one of the most influential being Fashion Revolution and their #WhoMadeMyClothes campaign that worked to increase consumer awareness of garment factory conditions and hold brands and suppliers accountable for the health and wellbeing of their employees.

While measures have been taken to improve the conditions of garment factories, workers still face deadly and hazardous workplace incidents.   According to the International Labour Organization (ILO), since the Rana Plaza collapse in 2013 over 109 accidents have taken place in major garment factories with 491 garment workers being injured and 27 losing their lives. Additionally, following covid-19, many setbacks experienced by brands disproportionately impacted workers, with low wage garment workers facing an inability to recoup the losses they experienced from being laid off during the pandemic.  Their employers, on the other hand, have been able to bounce back with minimal continuing financial losses. It is essential that consumers, brands, and organizations work together to create greater transparency and accountability within the fashion and textile industry, and protect the rights and lives of workers that are needlessly put in jeopardy.  Look out for another blog soon where we talk about ways that consumers and brands are working towards a more equitable and safer fashion industry soon!